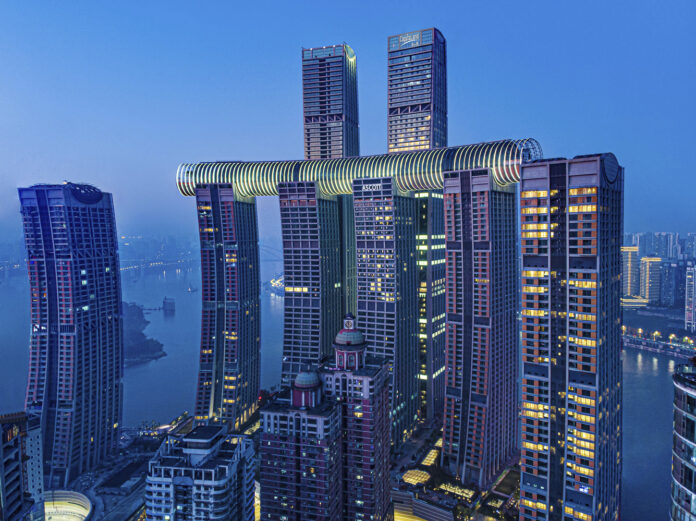 Following eight years of design, development, and construction, Safdie Architects is nearing completion on its latest project in China: Raffles City Chongqing, a vibrant complex which combines office, residential, hotel, retail, and recreational facilities across a 22.7 acre site, embedded within the densely developed Yuzhong district. Situated at the confluence of the Yangtze and Jialing rivers, the historically significant site was once home to the city’s most important gateway and the imperial entrance to the city: Chaotian Gate. The area was also Chongqing’s foremost riverfront trading post which has traditionally driven development in this inland city, catalysing its evolution to become one of the world’s fastest growing and densest cities with a greater metropolitan population of over 30 million people.

A phased opening of Raffles City Chongqing commenced in September 2019 with the unveiling of a 220,000 sq.m., five-story retail galleria and continues into early 2020, culminating with the opening of The Crystal, a 300m-long horizontal skyscraper perched at 250m and stretching across four of the development’s eight towers. Inherently site-specific, Safdie Architects’ design for Raffles City Chongqing responds to the city’s character as well as its mountainous landscape and extreme climate. The project embodies a considered approach to issues of population density, community connectivity, and urban renewal within a highly developed city center.

With a total built area of over 1 million square meters (approx. 11 million square feet), it is one of the most complex projects to date. It continues the firm’s exploration of vertical neighbourhoods, liveable urban communities, and thoughtfully connected public spaces. As with other Safdie projects, priority is given to maximizing access to daylight, air, greenspace, and views.

In order to achieve this in Chongqing, the development’s diverse program elements are distributed across eight slender towers which soar above a retail podium which features an expansive rooftop public park and civic plaza that connects directly to the city’s higher elevation streets. To account for the hilly terrain, the retail podium provides multiple entry points into the development at different elevations.