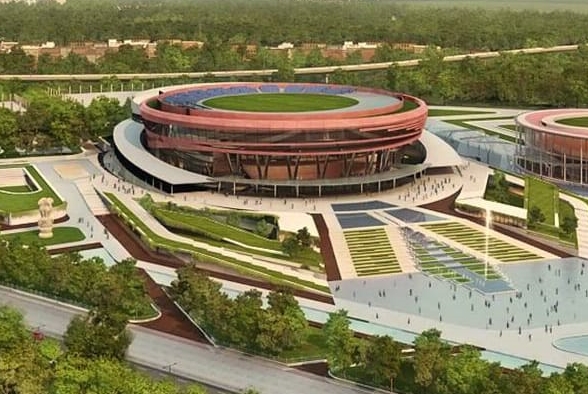 This convention center is located at Pragati Maidan and can house 3000 seats at a minimum and 7000 seats at maximum capacity in its Plenary Hall alone. With a total area of 50,000+ sq. m., it stands amongst the biggest convention centres in India.

With an area of more than 50,000 sq. m., ITPO Convention Center at Pragati Maidan will be among the largest Convention Centres in North India. The plenary hall alone has a massive seating capacity of 7000 and the lower open-air auditorium can house close to 3000 seats. In addition, there are 25 meeting rooms and an 800+ capacity Ballroom. Most of the halls are equipped with sliding partitions to cater to smaller functions as well. The plan dimensions of the convention center are approximately 200m x 130m.

The front plenary portion of the convention center is elliptically curved in plan and has an inward sloping glass + GFRC façade, with an observation deck aptly named “Window to Delhi.”

The building has a partial basement with 6 different levels. Primary structural elements at the lower two levels and columns are in concrete, whereas the upper-level hall, the stepped plenary area, and the roof are in structural steel. The main lateral force resisting system is moment resisting frames.

Roof trusses vary in lengths from 75 – 120m, with large clear spans ranging from 50-70m. The main cross truss at roof level is 120m long with 20m cantilevers, weighing around 600 MT. This truss practically supports about half of the plenary area roof plus a hanging floor underneath. The front elliptical portion is supported on 13 sets of tri-columns which are inclined in elevation.

Erstwhile MT8, the 600 MT truss: The 8th Main Truss, which served as a cross-girder too for the plenary roof presented challenges in design as well as its erection. With a total length of 120m and weighing around 600 MT, it had to be fabricated in 11 parts and was finally erected in place in 3 parts. Cantilever parts of 20m on each side were supported by staging till the connections were finally in place. The central part of the truss (around 80m) was erected using two high-capacity cranes in tandem lifting.

Façade Supporting structure: The elliptical and inward sloping façade system presented its own set of construction challenges. The accuracy and alignment were the major concerns, where both GRC and glazing support systems had to be carefully aligned in 3D space.

All primary structural system steel is of grade E350.

The unique and complex geometry of the structure, especially in the stepped plenary area presented considerable challenges in the fabrication and erection of structural steel. Connection detailing of beams crossing over in multiple directions and levels was minute with fine tolerance limitations. Due to large spans of the roof trusses, built-up or a combination of hot-rolled and built-up sections resulted in laborious fabrication efforts within already stringent timelines.

Top-Down Truss erection: Owing to large spans of roof trusses, their erection had to be initiated before the lower floor levels could fully be constructed. Concrete columns supporting the roof were cast first to facilitate the erection of roof trusses. This, in turn, resulted in roof supporting columns being unsupported for around 27m. These columns had to be guyed to achieve stability during roof erection

Inclined Tri-Columns: The roof of the front portion of the convention center was supported by 13 sets of tri-columns which were inclined in elevation for a major part of their height. The stability of these columns could be achieved only after the roof trusses in this area were in place. However, roof trusses couldn’t be erected till the tri-columns were in place. This presented a catch-22 situation. Eventually, it was decided to support the inclined columns with staging till the roof trusses were erected. This, however, presented another challenge for crane and material movement. 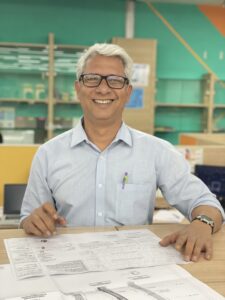