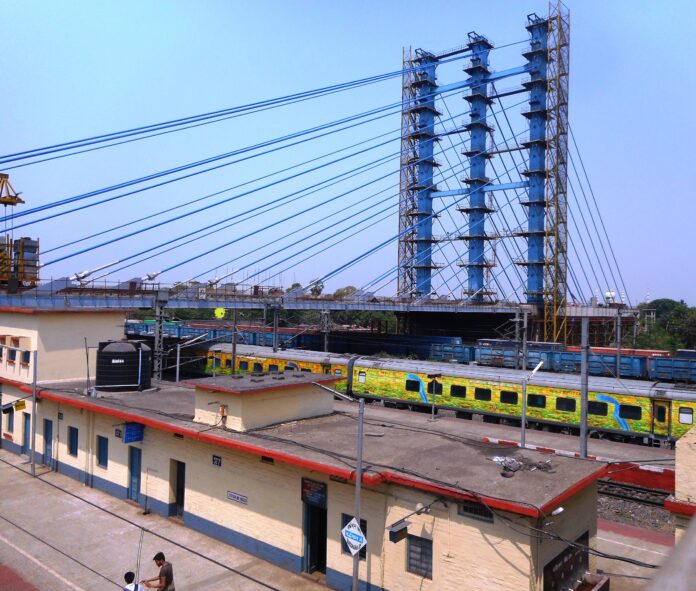 Barddhaman is situated at 107 km from Howrah, along the Howrah-Delhi Rajdhani route. There was an old multi-span ROB of brick masonry construction with plate girders over the Barddhaman railway yard, which connects the G.T. Roadside of Barddhaman town with Kalna-Katwa Road. The existing ROB was an extremely busy corridor carrying a large number of fast and slow-moving vehicles along with pedestrian traffic. Since the condition of the old ROB was poor due to its old age, the rebuilding of the existing ROB was sanctioned. A cable-stayed ROB was the only option acceptable to Indian Railways and the Government of West Bengal in the very busy and electrified yard.

The new ROB was proposed and executed at a distance of 65.5meter towards Durgapur from the centerline of the existing ROB. In order to have a clear, hindrance-free span over the Bardhaman railway yard, the new ROB has cable-stayed construction in a span of 188.429meter (c/c). It was decided that clear distance, between the northern face of the G.T. Roadside abutment and the southern face of the intermediate pylon, would be mandatorily 120.913meter. The minimum vertical clearance between the lowest point of the soffit of the superstructure and the highest rail level beneath the ROB was decided to be 6.50meter and the maximum vertical distance between the road surface and the track at 7.5meter.

The busy yard of Barddhaman that sits on the Howrah-Delhi Rajdhani route posed an engineering challenge in the form of the rebuilding of an existing dilapidated two-lane ROB into a new four-lane ROB. Barddhaman yard is one of the busiest yards of Eastern Railway and lies on the Rajdhani route. Barddhaman station has 8 platforms and 10 tracks.

There were numerous constraints, such as restriction of maximum height of the road surface clearances, and very busy movement of rolling stock over the yard. Such constraints resulted in an asymmetric cable-stayed bridge of 188.429-meter span with monolithic RCC in back span, composite deck, and steel pylon.

Geometry of the Cable-Stayed Bridge

The main aim of the Geometry Control is to ensure proper clearances from OHE are available at all times during the construction activities, and member stresses are within safe limits. Upon completion of the construction and prior to opening to traffic, the structure should achieve the required geometry of the bridge deck as per approved drawings.

There are two ways to achieve the required geometry, viz.

1) by adjusting the stay cable forces

2) by providing pre-camber to the bridge deck.

In many bridges, combinations of the two methods are adopted, but in the present case of Barddhaman, the geometry control has been exercised through adjusting the cable forces. Cable forces for each panel have been adjusted such that the upward deflection of the panel due to stressing of the corresponding cable will counteract the net total downward deflections due to erection of subsequent panels and due to laying of SIDL.

Although composite stay cable bridges are very rare worldwide, it was adopted at Barddhaman to have faster erection over the yard as well as to ensure more predictable geometry during construction.

Because of the large beam width required for 4 lanes at Barddhaman, 3 cable planes were proposed. The entire structure is over 124.88 meter with 12 panels and the average length is 12 meter.

Number of Lanes in each direction : 2

The scheme for the erection of the main span deck and the stay cable installation was prepared considering the site constraints, safety requirements, availability of traffic and power blocks.

Selection of pylon and erection at site

The cross-section is sized for not only strength and deflection requirements but also to accommodate a stressing and inspection route. The height of the pylon above the deck was fixed at 54.768 m. Three steel pylon towers (2.5 mx2.0 m box) were connected by ties and founded on RCC wall of M50 grade (concrete part of pylon).

For the stay cable work, Freyssinet’s Parallel Strand System (PSS) stay cables have been adopted, which has a design life of 100 years and is the most advanced and durable stay cable system in the world today. There are 3 planes of stay cables with 18 cables each. Vibration control dampers have been installed in long-stay cables (> 80m) as per CIP recommendations. Sensors for permanent monitoring of deflections and stresses during service conditions have also been installed in 6 stays subjected to heavy loads. A maintenance manual for the stay cables during service has been prepared in consultation with Freyssinet to ensure long-term maintenance during service.

Based on the preliminary aerodynamic studies, the bridge is not susceptible to classical flutter and galloping. The amplitude of vortex-induced oscillation is very low and not likely to cause discomfort to users using Frequency Domain Approach, peak buffeting response was estimated as 0.160 m for assumed aerodynamic force coefficients terrain roughness (plain terrain, surface roughness parameter = 0.005 m)

The technique used for the Barddhaman ROB is likely to be very helpful for future projects for implementation at the site. Since the planning of fabrication and casting yard has been done elsewhere, all activities at casting yard and fabrication yard can be done with proper quality and only erection can be planned over the yard with cable-stayed bridge technique.

Any bridge which is required to be constructed over a busy and long yard can be planned with cable-stayed bridge so that the work can be executed without any interference in the yard. Such a technique avoids the construction of piers inside the yard which in turn do not become bottlenecks for yard remodeling in time to come. 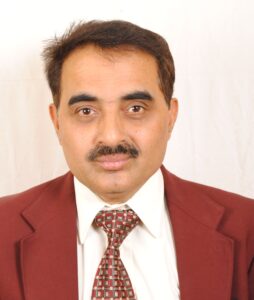 “This was one of the most challenging projects in a busy area where the large number of impediments such as 172 houses, around 300 hard encroachments, dismantling of 30 private buildings after land acquisition, relocation of hospital, school, part of running room, transformers, electrical utilities and water supply utilities were undertaken. The completion of this type of cable-stayed ROB has developed the confidence to adopt such cable-stayed bridge in the future railway system. On the satisfactory performance of RVNL for handling such extraordinary tough work, subsequently, the approach work was also transferred to RVNL by the state government on a nomination basis. This is the first of its kind in RVNL to make the new bridge functional. The cable-stayed bridges already constructed and commissioned are going to play an important role in time to come, especially at stations where the landmass is to be reserved either for future expansion of yard or passenger amenities.”