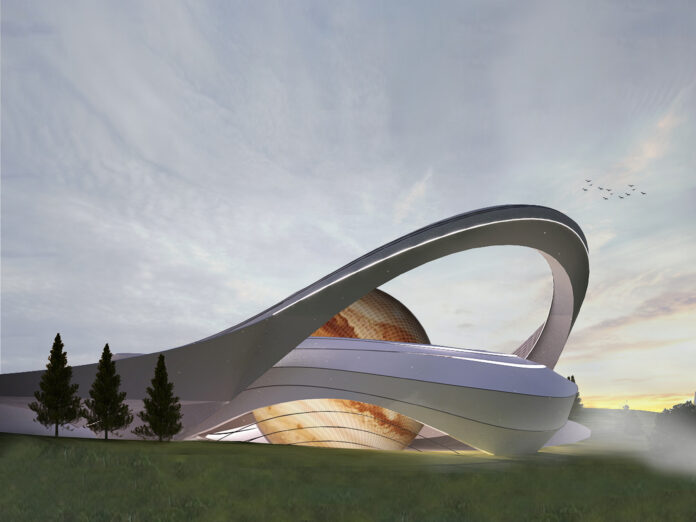 With the potential of Visakhapatnam unfurling year after year as it is set to become the capital of Andhra Pradesh, the city is being recognized and funded by international bodies. For this project, the World Bank has agreed to sanction the restoration and redevelopment of 380 acres of Kailasagiri Hill Top Park which forms the canvas for the Planetarium.

A planetarium for any city adds to the cultural as well as education aspects. The design team wanted to create a structure that sparks curiosity amongst youngsters and adults alike to come and explore the planetarium and learn about the wonders of space. An interesting structure in the skyline will add to that curiosity when seen from various points in the city skyline.

While designing a Planetarium,a lot of theories related to astronomy were studied that could spark curiosity,the study and research of Black Holes intrigued due to their unpredictable nature in space. Black holes are points in space that are so dense that they create deep gravity sinks. Beyond a certain region, not even light can escape the powerful tug of a black hole’s gravity. Today people are unaware of the concept of Black Hole due to less amount of information and knowledge compared to other bodies of space. The unpredictable nature of these bodies in space was an inspiration to create abstract morphologies by using references of the recently caught images of the Black Hole by NASA.

The concept revolved around the abstract form of black hole by using this image.The fascinating and captivating visual of a Black Hole fit perfectly well with ideologies of a futuristic Planetarium. The body of a Black Hole looks like a glowing doughnut of matter surrounding an abyss of Blackness; the dust and gas orbiting the black hole’s point of no return. Black holes have always been an astronomical fascination. We know they’re there but because light cannot escape from beyond their event horizons, they are invisible and difficult to find.

Steel as an Essence

The nature of this structure is based on a Futuristic yet sustainable design, considering that knowledge of space is infinite and ever-growing in the future. To replicate the complex form and structure of a Black Hole, advanced construction techniques were essential to bring this project to reality. This design includes the use of high end bent steel and digital fabrication to support the curvilinear shape of a Black Hole inspired design.

The design also talks about the concept of visually entering the vast space of a black hole by creating rings around the main structure which have a height of 50 metres to mimic its abstract form. This height is achieved through utilizing state of the art technology as well as involving a team of best steel fabricators in the country. Fibre Reinforced Concrete panels are used as exterior panelling of the structure for a seamless visual of Planetarium. The rings revolve around the dome at a height of 20m to mimic the form of the black hole by using state of the art technology.

As mentioned in an earlier response, the inspiration was the Black Hole and the infinite possibilities it holds within. The body of a Black Hole looks like a glowing doughnut of matter surrounding an abyss of Blackness.

This was then brought to reality via a process of abstraction. The design mainly consists of four major structural parts amalgamated together, the external ramp connecting the entrance, the outer ring, the inner ring, and the dome. The dome of the Planetarium replicates the glowing doughnut shape of the black hole, which will also be lit by led panelling on the exterior surface to visually highlight the concept of black hole.

The outer ring which varies in height replicates the dust and gas orbiting the black hole’s point of no return. As one walks through the ramp, we enter the upper level of the Planetarium Inner ring, which also has access to the outer exhibition ring and the planetarium dome. As you move down towards the lower level, ancillary spaces like the cafeteria, exhibition spaces, Admin and office spaces, astronomy club, library are designed keeping in mind the circulation patterns, proximities, and easier accessibility to spaces.

The aim was also to create an environment that provides Advanced amenities which moreover compliments the Futuristic design characteristics of the structure. As the site location, The Kailasagiri Hills falls under an Eco Sensitive Zone, the only way to reach the destination is to walk till the top of hills while experiencing the scenic beauty wrapped around the hills. The idea of battery-operated cars was introduced for the public to commute within and around the site context. The landscaping of the site is planned and designed to replicate the celestial bodies in space revolving around planets and black holes. The site also acts as a part of the structure not only conceptually, but visually as well. Installations like SunDial, Martian Surface, Science Fair Pavilion, Solar System sculpture etc have been introduced creating various experiences while transitioning throughout the site. The design of Planetarium includes a ring that is wrapped around the main structure, also serving as an exhibition space. Transitioning through this ring gives an experience of walking over a different body while looking at various exhibits.

The physical geometry of a building affects its aerodynamics properties and how well it can withstand the storm. The design was moulded after studying advanced wind and daylight analysis to create the best possible design solution which responds well to a sensitive environment. Geodesic dome roofs or buildings have low drag coefficients and can withstand higher wind forces than a square building of the same area. Moreover, openings have been strategically placed on the outer ring of the structure at a good height such that these become conduits for air movement and reduce stresses on the structure. Rings of skylight have been provided in the design to maximise the amount of daylight entering the public space, also utilizing less electricity throughout the day.

In the process of building a manifestation of futuristic as well as sustainable design, various advanced technologies were studied to achieve the best possible outcome from this project the medium of Rhinoceros 3d and Grasshopper Software was used for designing and conveying ideas in 3Dforms. Mediums of digital fabrication were also used to derive the complex geometries.

The experience till now has been elevating and very knowledgeable. At every stage of design as well as execution, the team always learnt new things and evolve as designers. It was both honour and pride to work on this project. Honour, because of being associated with such a prestigious project that is set to transform one of India’s up-and-coming cities’ skylines, and pride because of the individualistic approach and critical thinking was appreciated and cherished. Architect is looking forward to working on more such distinctive projects that will transform the face of Indian architecture.

The project is currently sanctioned for Tender. The construction will commence by the end of 2021

“As the architectural landscape of India is growing and evolving, we at Studio Emergence believe in a vision that’s different, bold, yet intuitive. It’s important to think about our legacies, and the land we are leaving behind, which is why we specialise in Parametric Architecture where both design and environment are taken care of in equal measure.” 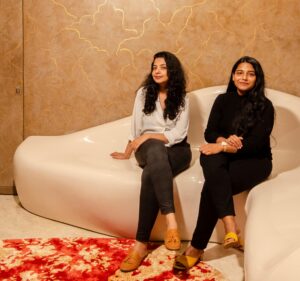 Lulu Group collaborates with UP Govt to open 6 shopping malls