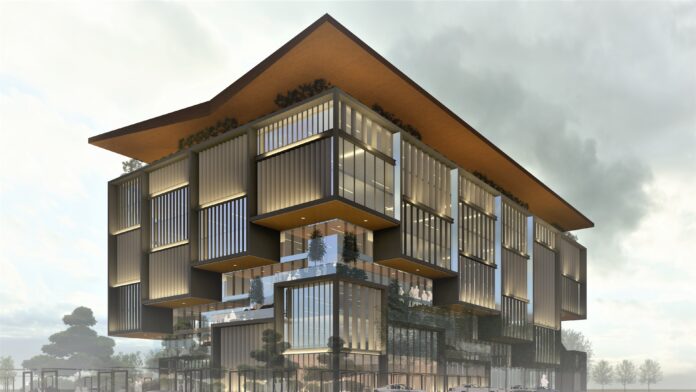 A new-age office, that derives from the need to create pauses in the workplace and interaction at vertical levels.

Office buildings are moving away from the conventional closed work environment to incorporate emerging trends of flexible and co-working spaces. The proposed development for the BPO Tower in the Tech city of Bongora, Assam is envisioned as a new-age workplace that captures the influx of new concepts and cultures into the design.

Located in the vicinity of the Guwahati Airport, and away from the city centre, its context both poses challenges as well as suggests ways to tap into the regions’ strong connection with nature and create a unique architectural response. The site layout emerges from the architect’s commitment in creating a pedestrian-friendly campus that promotes the idea of ‘walk to work’.

Traffic congestion and movement conflicts on the site are resolved by placing the drop-off and pick-up points at the opposite ends of the building. This allows the employees to walk through a landscaped plaza in the front.

The design builds upon the notion of creating a balance between work and leisure, that translates into interconnected stepped terraces on the exterior façade. This scheme defies the conventional designs of the office and reinforces the notion that workplaces are now consciously creating pauses as an appendage to closed cubicles.

Within the eight-storey structure, functions are planned around a compact, central core housing lifts, staircases, toilets, and other ancillary spaces. This layout increases spatial efficiency by minimizing corridors spaces and opening the building to a 360-degree peripheral view. Open floor plates and co-working spaces in addition to green terraces have been incorporated on upper floors to allow flexibility and efficiency in its use — considered after a careful study of prospective users and their work patterns.

The informal nature of co-working spaces, driven by the idea of freedom and collaborations require maximum flexibility and easy access to open spaces, suggesting their placement on the ground floor alongside the cafeteria, thereby benefiting from the shared amenities. They are designed to cater to groups of varying sizes, while maintaining privacy and ensuring a comfortable environment.

Formal offices are stacked on the upper floors, where independent floor plates supplemented by 4m wide leasable and usable terraces allow business owners to expand and contract their functions according to their needs. The flexibility provided by this layout allows 100 per cent of the space to be leased out for different purposes. Common functions such as yoga area, health club and cafeteria are also planned on the eighth floor acting as a community interactive space. The functions come together within a rigid structure, which allows multiple breakaway spaces from hectic work schedules.

The facade seems to be a play of solids and voids, composed in a rhythmic pattern of square and rectangular box frames with vertical louvres. However, the scheme is an outcome of a well-thought functional, structural, climatic, and aesthetic logic. The glass void created by landscaped terraces splits the building into two masses, thereby evoking the imagery of a floating structure on the top.

The terraces are further connected by an external staircase that envelopes the built mass, suggesting movement and interaction between various levels. They are balanced by repeating solid box frame modules intended to counter the monotony that could otherwise arise from a monolith glass facade. Their repetition is, however, broken down by the double-height volume delineating the main entrance to the building, whose seamless structural glazing is recessed from the main facade to draw attention and protect from direct sunlight. Movable louvres add textural and spatial variation to the visual scheme. At the same time, shadow patterns created on the glazed surface accentuate the experiential value of the facade and create a unified visual composition.

The unique projecting and receding facade scheme are a direct result of the use of a steel composite structural system that facilitates lightweight construction and thin structural members. The construction system allows up to 12m column-free spaces in the interior and speeds up the construction, which was required by the brief. The structure derives its rigidity from the solid RCC core, which also supports the canopy on the roof.

The material palette is both modern and traditional, connecting to the region’s natural root and its aspirations for the 21st-century. RCC structure, and glazing while structurally necessary, are balanced by recycled wood panels for ceilings and roof to infuse regional identity. The use of zinc and aluminum as cladding materials ensure that the structure remains protected from weathering due to heavy rain.

The design aims to create a positive impact on the environment and relies on passive and active, climate-responsive strategies. Mutual shading and sun-tracking louvres on the South-West facade minimize heat gain and eliminate the dependency on artificial air-conditioning systems. The use of solar-reflective glazing further helps maintain the indoor temperature while allowing adequate lighting for the interior to function. Green terraces on the facade, combats the heat island effect that could otherwise arise due to glass structures.

Solar panels are installed on the roof to bring down energy consumption. Water systems are designed to allow rainwater harvesting, and its judicious usage is ensured through a drip-irrigation system. Wastewater recycling methods allow the reuse of water for landscape done mostly using native vegetation that adapts itself to the climate.

In accordance with DFI’s ethos of people-first design, the BPO Tower is an experience that promotes meaningful interactions and pauses those awes, inspires and stays in the memory of its users. 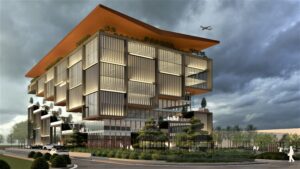 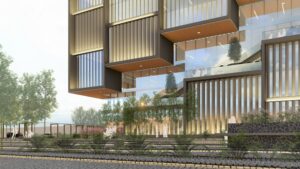 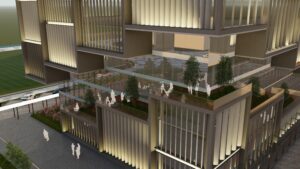 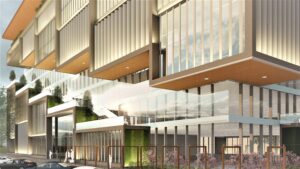