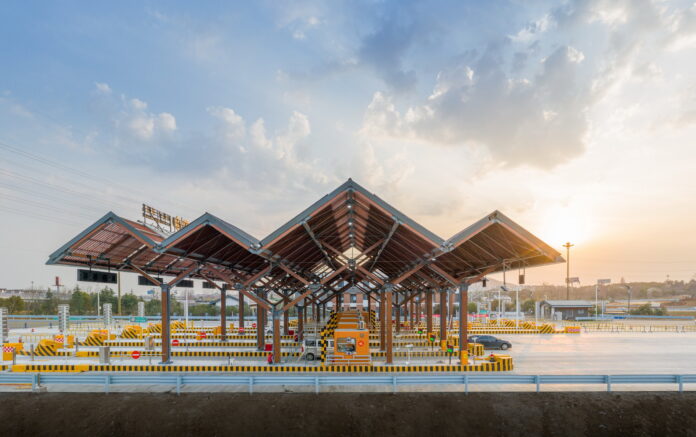 In 2019, ATA design team received the task of designing a toll station for Tangshan Interchange of Shanghai-Chengdu Expressway. As the most important transportation hub in the east of Nanjing, the owner hopes to show the image of Tangshan as the “East Gateway of Nanjing” through the shed of Tangshan Interchange, and it is also an important node for the peripheral transportation organization of the 2021 Jiangsu Garden Expo Park.

In view of safety, economy, and functionality, transportation facilities such as toll shed usually adopt standardized styles and sheds usually adopt large-span steel structures to meet the traffic needs of lanes. The modelling of the station shed and the space under the shed are more focused on the overall space perception than the detailed modelling. Passengers in the rear row look at the outside from the side windows. Therefore, the probability of observing the space under the shed is higher than that of the facade of the shed.

From the perspective of economy and safety, the use of standardized steel members to build large-span structure selection is in line with the identifying characteristics of toll sheds as transportation facilities. Therefore, grid structure and truss structure are the mainstream of structural forms, and columns are often supported at the four corners and the middle according to different spans. However, standardized industrial components are easy to appear monotonous due to their lack of changes, and it is difficult to show their characteristics, especially how to show the local characteristics of buildings, which is a difficult problem faced by architects.

In this project, the design team tries to find a balance between the standardization and richness of the structure and uses the expressive force of the structure itself to present the localization characteristics of the building. The design team adopted the structure of the bifurcated support ‘column & folded’ plate roof. The bifurcated support column consists of standard steel bars supported vertically and obliquely in the plane. The roof is a space folded plate structure composed of cross beams. The interface dimensions of the inclined steel support bars are divided into three categories, which are smaller and smaller according to the stress characteristics, and finally connected with the roof beams.

When using structure as the element of spatial expression, an important principle is that each component truly reflects its stress characteristics, and each structure plays its role. For example, the size change of section steel of cross column from bottom to top corresponds to the change of bending moment, the tension rod is clear briefly, the web areas of the cross columns and beams are closed by aluminium plates, which is used as a bridge box for cables. However, on the one hand, the purpose of exposing the structure at the intersection node is to facilitate the daily maintenance of bolts, and on the other hand, is to realize the crossing of cables here.

When we chase the ambitious curve modelling created by computer algorithms, the method of analysing the basic problems of architecture by using the basic means of design is still applicable in traditional architecture. It can also create a building space with controllable cost, practical function, and profound influence with the publicly available materials and simple and reliable construction. 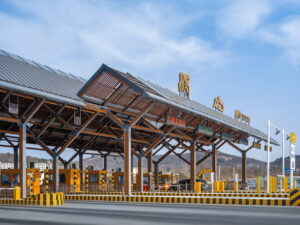 Pioneering as the Quintessential Roofing Solution