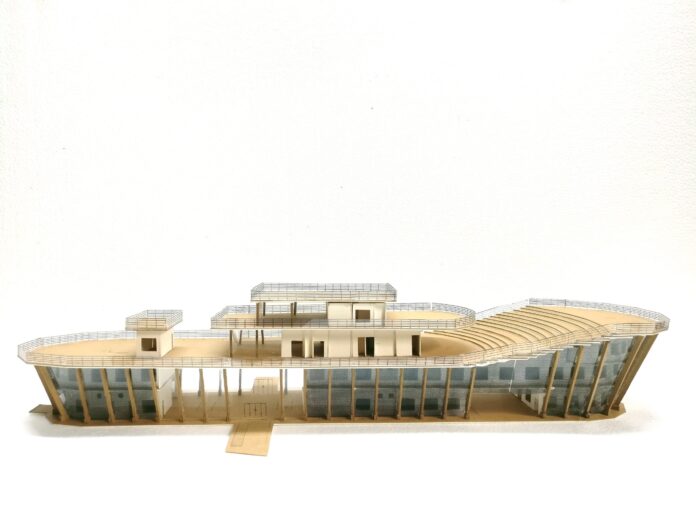 The proposed terminal building for Captain of Ports is designed in front of the newly constructed Jetty in Panjim, Goa. The proposed building comprises of ground floor and two upper floor levels.

There was already existing Jetty which has three arms from the land till the jetty. The building was to be planned between land and jetty and the positioning of three arms had to be considered while designing the building.

The requirement of the client was to have immigration offices, large lobby with atrium for cruise passengers, administrative offices, barge owner’s offices, Amphitheatre with restaurants and control room.

Initial Thought
Since this building was for captain of ports and in the water the initial thought process was to make the building which resembled a ship.

Using Steel
The construction is over water and the building profile slopes outward above the ground floor. This would have been difficult with concrete. Hence steel was selected as the structural material, to enable a lighter construction and used with profiled decking eliminating the major requirements of formwork.

Features
The shape of the building resembles a ship. The building has steel columns which are at an angle. The building façade is covered by zinc perforated jail which hides all the services which are running behind the jail. The total area of the building is 3880 sq. m. The ground floor has a double- height Lobby for Passengers, with café on one side and staircase, lifts, and washrooms on the other side. The ground floor also comprises of immigration and custom department.

The first floor has captain of Ports Office Space, Accounts Department, Marine Department, Light House Department, Hydrographic Department, Drafting Sections, International ship port security Department, Server Room, Washrooms and Cabins for Officers. The building has an unusual geometry where in plan the building is tapering and is curved with different diameters at both ends. In elevation also the building is expanding as it goes higher.

The software used are:
– AutoCAD
– SAP 2000 for Structural Analysis and Design

Learning
The client gave consultant flexibility to design. It was an unusual project to design in water where the reflection of building can be seen in water. The timeline of the project was two years. 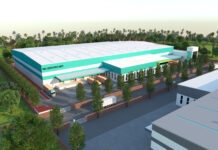