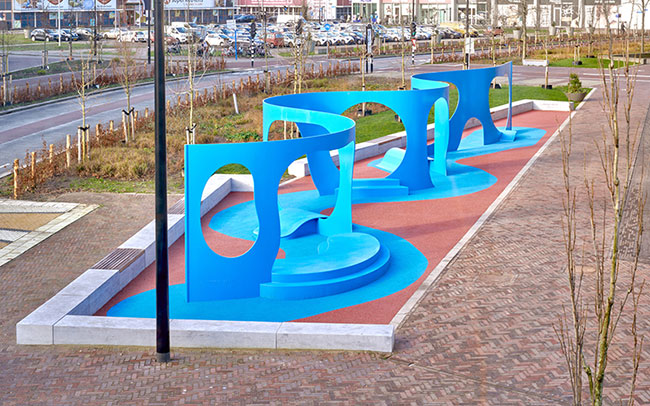 Baltimore Bend has become an icon for Almere Buiten since its recent opening. The multi-functional art playground Baltimore Bend, designed by Arttenders and Studio Spass, has been finalized and is shining in all its brilliance in Baltimore Square. The work is commissioned by the municipality of Almere and has been festively opened today by alderwoman Hilde van Garderen. 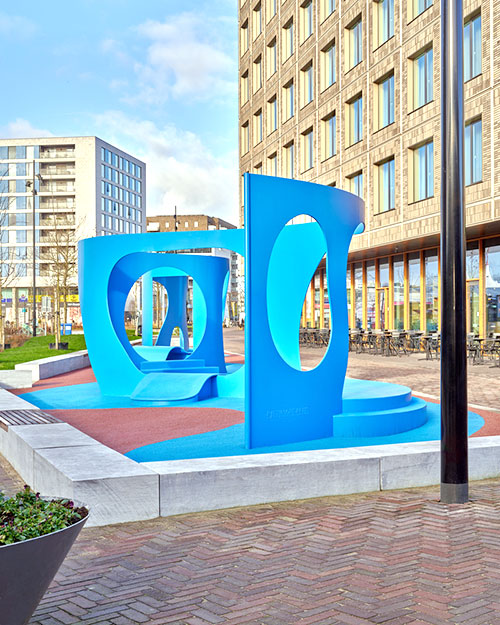 The Baltimore Bend has been developed to raise the traditional concept of a playground to a higher level. Through social design, the work of art is not only a feast for the eyes, but also serves a functional and social purpose for its surroundings. The wishes of the residents and technical demands of the location itself have been the starting point of the design process.

The organic shape with its cutouts is inspired by the city of Almere; her colorful and experimental architecture, the water of Almere, and the diversity of the city and her inhabitants. The blue color is a reflection of the water and color samples taken from the neighborhood. The applied artwork is more than just a playground for children; the artwork serves multiple functions for diverse target groups. For young people, the elderly, disabled, and visitors of Almere Buiten, the renewed Baltimore Square acts as a meeting place, sporting venue, and recreational hub.

Through the curved shape and perforations in the brightly colored steel construction, a playful and interesting route is created which invites for exploration of different areas. The abstract and innovative design stimulates children to use their fantasy and creativity to make their own play environment. The open shape of the artwork ensures a clear view for parent and child and connects the artwork with its direct urban surroundings.

Bullish on India, Posco may have another go at setting up greenfield unit

A REFORM TOWARDS IMPROVEMENT