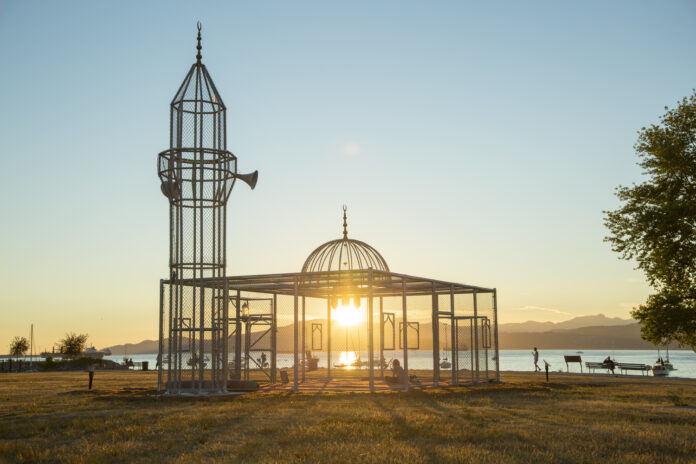 Based in Riyadh, Saudi Arabia, AjlanGharem works as a Mathematics teacher during the day and a contemporary artist in the night.‘Paradise has many gates’, Ajlan’s installation of a mosque with a cage-like structure, has been given its due recognition and admiration at many international exhibitions, and is now a part of Vancouver Biennale 2018. Ajlan’s second key project, ‘Mount of Mercy’, is a collection of numerous images, hidden letters and discarded objects left by pilgrims at the religious site of Mount Arafat.

Along with his elder brother, AbdulnasserGharem – an established contemporary artist, Ajlan has also created Gharem Studio, an alternative arts space in Riyadh for young, emerging artists of the regio

Paradise Has Many Gates is AjlanGharem’s first installation work – a 10 x 6.5-meter mosque constructed from industrial steel. While true to the design and function of a traditional Islamic place of worship, Ajlan’s mosque is built from the same cage-like material that Western countries use to erect fences along their borders, preventing refugees and illegal immigrants from entering.Along with the installation, the work includes a video of the artist and other construction workers building the mosque in the desert outside Riyadh, staging a prayer performance, and then de-installing it.

Evoking feelings of imprisonment and anxiousness by way of its caged structure, while also representing Muslims’ center of prayer, this mosque invites all visitors, Muslim and non- Muslim alike, to question how we designate and behave within sacred spaces, and how their meaning will differ between generations and cultures. 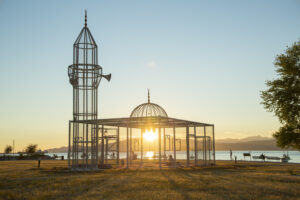 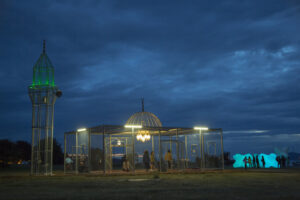