Bhachau is a small town located near the entrance of the Kachchh district of Gujarat, India. It is known as the Gateway of Kachchh. Most of the old towns of this area have collapsed in the 2001 earthquake. Since then, the Nagarpalika of Bhachau has taken up many projects to rebuild. The entrance to Bhachau via the national highway is also the entrance to the Kachchh district. The entrance gate structure is a part of the Bhachau urban regeneration projects taken up by the Nagarpalika.

The initial approach to the entrance’s tall structure was to design a prominent landmark, which would not just mark the entrance to the town of Bhachau but also serve as a visual landmark in the uninterrupted National Highway Landscape. The structure, even if thought of as a fixed structure in its physicality, has been designed to be dynamic in its activities and use.

This initial thought process gave way to designing the structure as an observatory for the town which could embody some culture aspects of Kachchh and its biodiversity. Hence, the five-storey structure was designed to be accessible for pedestrians at the top two floors.

The steel structure of the gateway works as a contrast to the scales of the national highway overpass and the human scale of the town. It acts as a large billboard by responding to the highway and its speed, while creating an accessible landmark for Bhachau and the district.

The road from the highway is flanked by three traffic islands. The structure highlights the entrance to Kachchh by stitching these together and negotiating the scale of the overpass with an elegantly detailed steel structure that matches the historical and geographical significance of Kachchh. The mammoth appearance of the gateway has been achieved with the help of one five story curved steel frame which is accessible on the top two floors.

The translation of the motifs on the structure and the detailing of the steel celebrates Kachchh and its local craft, culture, and biodiversity in its overall aesthetics.

The design is large, intended to be visible from the highway yet it is a light structure. It is colossal, meant to be iconic, but it also sits gently at the entrance. The interactive structure is habitable at the top levels, which reinforces the human scale to the tall structure. Steel frames accommodate panels and custom-made ceramic tiles have been mounted on steel plates, representing the culture and craft of the hauntingly beautiful Kachchh.

Motifs in the form of illustrations of the local flora and fauna have been used to celebrate the local craft and authenticity of the place. The motif design has been structured according to an elaborated geometric grid inspired from the nuances of the famous Kachchh embroidery. This perforated approach also aids stability against wind load.

The use of steel has brought the entire structure together in its form and allows one to experience the city and its nuances through the gateway. The curved structure allows structural stability keeping in mind the different forces and loads (dead, live, wind) that play a key role.

Slender members help keep the language of the structure light. The whole structure consists of rectangular hollow steel members, which rest on pile foundations. The 85meter long, 24meter tall and 4-meter-wide structure is divided in a grid of frames which adheres to the panoramic appearance of the curved, painted steel frame building.

Two parabolic arches with a height clearance of 16-meter tie the structure together and create a gateway in perception. Four varying levels make up the framework. The upper two habitable levels shoot above the highway, over the bridge for a panoramic view of the city and around.

The 12 display panels of 4×4 meters and 4×8 meters made of painted steel framework and exterior grade printed ceramic tiles depict the pride and culture of Kachchh along with LED billboards facing the city side of the gateway for advertisements and to act as information panels. The top two floors are accessible through a set of stairs on either side of the structure. The said two floors are equipped with benches to sit on and with lighting that enhance the beauty of the structure.

“The project envisioned as a stark, large, tall structure in the small town in Gujarat paves a way for creating and reinforcing a new narrative around the public infrastructural landscape of Kachchh. The proposal for the entrance gate opened up the mechanisms of the layered administrative processes and the design negotiations with the different agencies that help in taking the design to the ground. The project is a part of a bigger scheme which proposes a new future for Bhachau that addresses the different challenges for a new idea, a new vision to be accepted and passed further ahead to be constructed and inhabited. The project also works as part of a larger strategy to create well designed urban public spaces in smaller towns of Gujarat.” 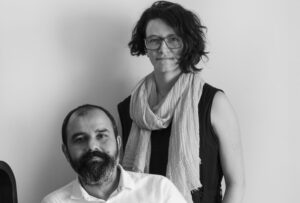 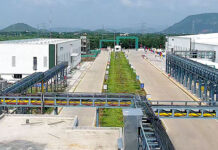 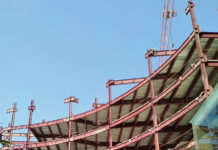