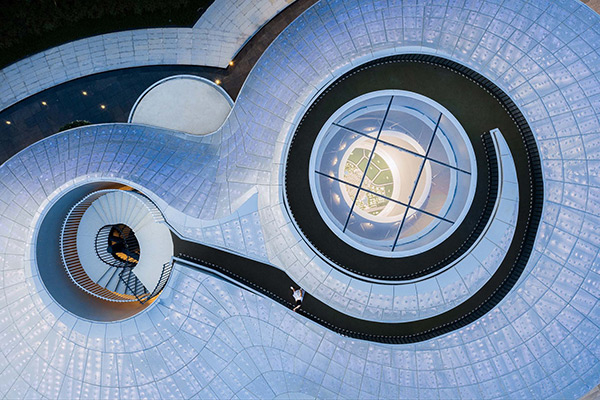 Wutopia Lab proposed an Aluminum Mt in Mt. Luofu, Canton. It served as a Traditional Chinese Medicine Health Industrial Park Exhibition Center. The meme was a classical but a most spiritual one in the literature of the Chinese garden, which was “one sea and three mountains.” Immediately I decided that the fishpond should be remodelled. Along with two other mountains, an artificial mountain serving as a presentation centre would form a new version of “one sea and three mountains,” an earthly paradise.

The ‘slivering’ aluminium board would be an ideal material for the mountain. There should be a moment when the heavy mass and texture of the aluminium material ‘dissolves’, providing a perfect foil for the lightness of the mountain. Thus thinking, I used three different aluminium boards with perforation rates of 45, 60 and 70 so the mountain behaves from dense to sparse from top to bottom. The effect was that the mountain looked overwhelmingly heavy most of the day but lost its massive look when perceived from certain angles. At night, with the lights on, the mountain would lose its materiality and be transformed into an enormous mountain of lamp. In this way, the mountain assumed an ethereal look.

The Aluminum Mt. was named the Third Mountain. Since it was constructed on the Mt. Luofu, it should not become a sales centre that is eager to show off itself. It should present a lifestyle that was lost upon us, some dreams that we urban residents are dying to realize. In a humanistic space full of symbolic meanings, a space built with modern technology while exhibiting traditional wisdom, we are supposed to feel happiness. To bring a beautiful life: such is the meaning of the third mountain, a celestial palace of our time.