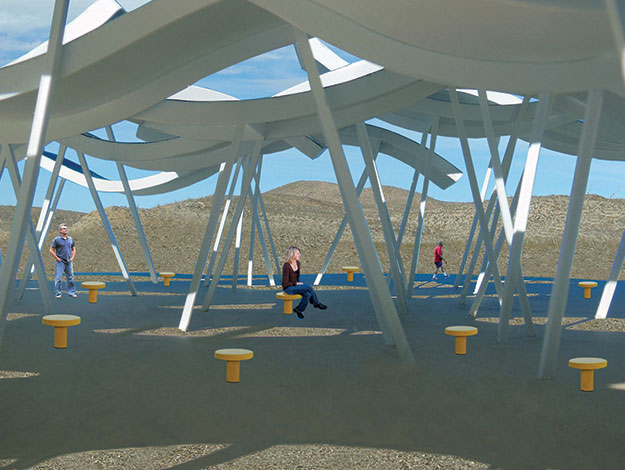 The Solar Wave Canopies were designed as large, prefabricated, modular, public art installations that make electricity from the sun, and collect rainwater, for the communities in which they are built. The structures are formed from two different curved steel elements that are prefabricated into modular sections. Each of these sections is clad with flexible photovoltaic sheets that convert sunlight into electricity. This solar electricity is sent into the local power grid. Rainwater can also be funneled off of the surface of the curved elements into storage container for later use by the local community.

The curved elements are supported at different heights with steel tubes, and can be assembled into many different site-specific sizes and configurations. In every case, the curved elements form a shaded space below for public gatherings of all kinds. Many small mushroom shaped seats are sprinkled below the curved elements. The Solar Wave Canopies are part of a series of design proposals that explore ways in which alternative energy gathering and storage systems can be integrated into public art installations, in an aesthetically pleasing and exciting way. It is hoped that these kinds of installations will help to promote the integration of alternative energy systems into all forms of the built environment.