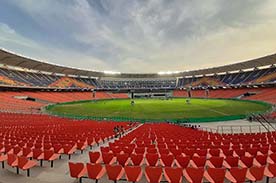 Vision
Motera Stadium responds to the vision of Shri. Narendra Modi, the Honourable Prime Minister of India, doubling the capacity of the previous venue. Despite its size, the stadium was constructed in three years. The new home of the Gujarat Cricket Association includes 75 corporate boxes, four team dressing rooms and facilities, state-of-the-art club facilities with practice grounds, an indoor cricket academy, and a 55-room clubhouse which will have an Olympic-size swimming pool.

The Intellects
The now well-known design-build project began when L&T, one of the largest contractors in India, decided to pursue the project. Walter P Moore was contacted by L&T to join the project team based on their experience in sports structures and lightweight long span roofs.

Striking Highlights
The stadium is IGBC’s ‘Gold Rating’ under its ‘Green New Building Rating System’. The VIP Pavilion has a presidential suite and 75 corporate boxes while the club house has 55 suites and an Olympic size swimming pool. It has separate training facilities for indoor and outdoor games.
The stadium has been designed for 100 years, the stadium has about 9000 precast elements weighing from 3 MT to 285 MT. The upper bowl is of precast elements with intricate geometrical shape and heavier elements. It also includes state-of-the-art drainage system that will help reduce rain delays.

Designing the roof
The concept of tensile fabric roof over upper bowl was developed by POPULOUS considering the elegant look of the stadium. L&T appointed Walter P Moore as structural consultant who has expertise in these types of roof system design. Walter P Moore carried out the design, considering the fact that the city of Ahmedabad is in seismic zone 3, the roof needed to be lightweight to reduce seismic demand and developed an economical roof system.

Therefore, very early in the design phase, it was decided that the best option would be to incorporate a lightweight cable-supported tensile membrane roof supported by steel columns. Additionally, the team decided that the reinforced concrete bowl and the roof structure needed to be independent of each other.

This decision was primarily motivated by the seismic hazard for the project. Without such an approach, the cost premium on the roof and the supporting structure due to seismic forces could have been significant.

Ultimately, Walter P Moore and L&T design team decided a tensile fabric roof system that is seismically separate from the concrete seating bowl and supported by steel ‘V’ shaped columns. The cantilever span of the tensile membrane system is around 30m and covers the upper bowl of the stadium. The tensile membrane system primarily comprises of a two-chord compression ring at the outer edge (stadium perimeter) and a single tension ring cable on the inner edge (toward field of play). The radial cables are pretensioned and tied to the outer compression ring with cable connectors forming ridges and valleys for the membrane roof. The radial cables are aligned in such a way that rainwater flows over the membrane and drains into the gutter positioned along the lower chord of the compression ring, this, in turn, provides shape to the membrane panel.

The outer compression ring is supported on the structural steel ‘V’ columns along the circumference at regular intervals. In addition to serving as gravity supports, ‘V’ columns also provide resistance to lateral loads for the roof. The structural steel columns are typically supported on the RC column at the concourse level. The inner tension ring also supports catwalk running all through the inner tension ring circumference. The field of play lights are mounted on the catwalk along its perimeter and it also allows access for inspection and maintenance of the tensile structure. A non-linear analysis program NDN ® was used to analyse and study the behaviour of the structure for several gravities, seismic, and wind load combinations.

The roof erection involved synchronous pulling of the cables from the compression ring supported by the columns, this was imperative to avoid unbalanced loading on the compression ring. Although challenging due to a limited number of strand jacks that were used during erection, various parties including L&T, Walter P Moore, and a specialty contractor for cables, came together and worked collaboratively which resulted in a successful erection process.

“The bowl is a reinforced concrete structure that is inherently very heavy,” explains Director of Design Viral Patel. “The lightweight roof structure, on the other hand, is not arranged to readily accommodate inelastic behaviour. Without separating the bowl from the roof, the bowl would have been subjected to amplified seismic demand from the roof.”

PTFE (polytetrafluoroethylene), Teflon-coated woven fiberglass, was stretched between a circumferential inner tension ring and an outer compression ring. A wind tunnel test was also performed to optimize roof design. Wind load provisions in most codes do not address roof structure for stadiums such as Motera. Additionally, for a structure such as Motera’s roof, it is important to study the effects of unbalanced wind loads, which is not covered in building codes. Walter P Moore used Load Response Correlation Method to develop critical wind load patterns from the wind tunnel test.

Doubly Curved Facade
The façade has a complicated three-dimensional profile developed using advanced software. The back frame is made of steel tubes bent to a 3D profile and the outer skin surface, discretized into segments each made of aluminium sheets bent to profile using computer aided cutting machines.

Stadium Precast Elements
The most complicated part of design and execution is the upper bowl that has intricate geometric shape columns. Precast elements of 35 m in length and 285 MT in weight were used to significantly reduce the number of joints to a minimum and speed up construction.

Challenges faced:
The steel roof had to be executed with minimal tolerance as per the analytical and design requirements. The erection of the steel compression ring, pulling and locking of radial fully locked cables at various stages as per erection sequence, laying of fabric sequentially as per design requirement and coordination with all stake holders were challenging tasks.

The most critical part of precast element was the erection process of lifting the complicated shaped, heavy weight ‘Y’ Column from a horizontal to a vertical position that was achieved with in house expertise using a specially made C-Clamp and trunnion arrangement.

Integrating the steel frame with the skeleton aluminium panel of the façade was a major challenge, as different agencies were involved. An advanced design software was used to coordinate and transfer the details precisely for successful execution.

Due to space constraints and continuous movement of public visiting the temple inside the site premises, logistic planning was tough which was overcome by micro level planning the construction sequence of significant erection and assembly activities.

A 132 kV thermal power transmission line passing through a narrow portion of the site that crossed over the stadium bowl was relocated as an underground line enabling site progress.

Team Motera has followed all best practices in terms of EHS and Site team showed commitment to achieve organization’s Goal of “ZERO HARM”. The project had clocked more than 21 million safe man hours with zero ‘Loss of Time” Injury.

At peak times, 200 + engineers and 2500 + workmen were engaged in this landmark project.