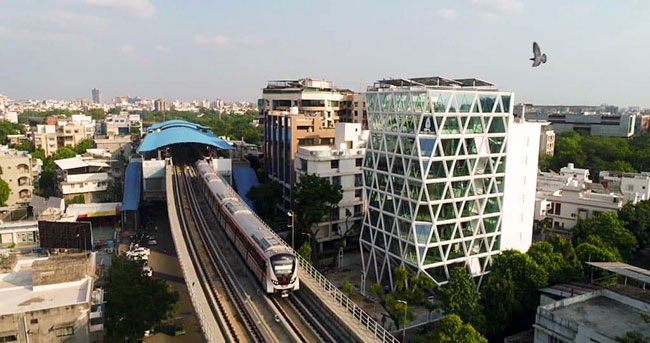 Modern commercial real estate has evolved and differs a lot from the old ones in many ways. Incorporating new and contemporary aspects of office space, it is rapidly redefining the landscape of the Indian of Indian real estate. Modern and newly-emerging commercial spaces are located in key areas of cosmopolitan buzz and economic activities like near expressways, metro stations, and corridors.

The latest trend for commercial spaces is integrated wellness commercial complexes where a complete ecosystem is maintained for office employees as they get each and everything within their campus. Many commercial developments offer LEED Platinum, earthquake-resistant structures, MERV 14 filters, designed floorplates to facilitate maximized light penetration and space utilization and an integrated building management system (IBMS) to enable energy management.

Features such as these and many more are raising the bar pertaining to commercial real estate buildings in India. 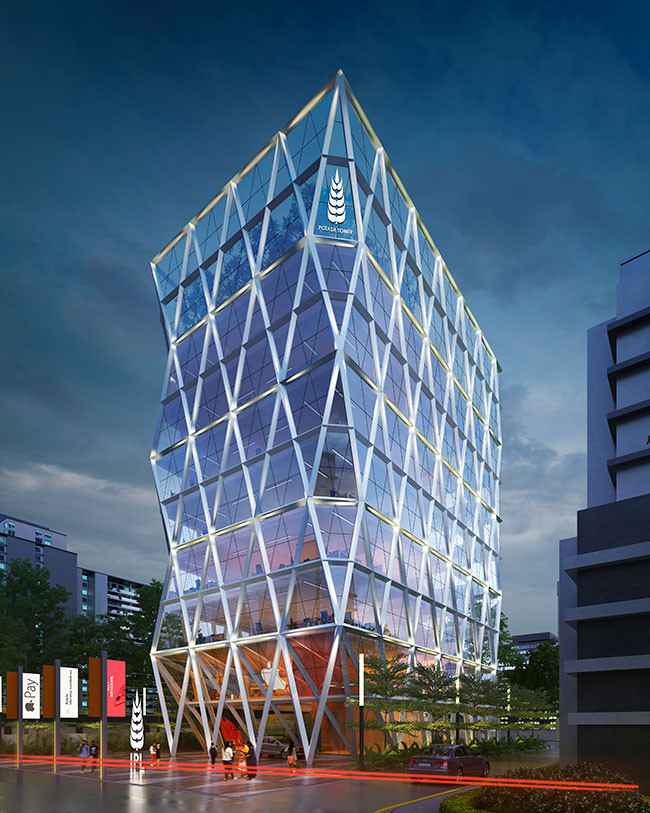 The new corporate office of Indian Potash Limited is located in the dense urban fabric of Ahmedabad surrounded by diverse offices, residential development, and urban life.

The company, Indian Potash Limited was formed in 1955 with the main objective of promoting the balanced use of potash as fertilizer in the agricultural sector. The corporate office is visualized to reflect the ethos of the company along with the integration of sustainable design principles.

PROJECT PRECURSOR
The client wanted a unique corporate building that will rank among the top 10 landmark buildings of Ahmedabad They had discussions with various local architect firms and vendors, yet were not satisfied with the presentation and proposal of local architects. Since the idea was to build an iconic building, which would become an identity for Ahmedabad, the IPL brainstormed internally and concluded to appoint PMC first rather than discussing with local architects and appointed CBRE as their PMC partner.

The CBRE team prepared a project brief based on the client’s expectations and floated EOI to the local, national and international architects. After collecting EOI responses, the architects were invited to a design competition, resulting in the selection of INI Design Studio as the project architect.

DESIGN DETAILS
Indian Potash Limited is conceptualized as an encompassing theme of energy efficiency enveloped by a diagrid structural system. Being a compact floor plate, conceptualizing a design that allows maximum use of floorspace to the user, was one of the main aspects considered. The same was theorized by incorporating the diagrid system as the project envelope. The diagrid structural system acts as an external framework, redirects lateral load and permits to development of column-free internal space. It further adds an identity to the building that is effortlessly recognizable in its context. 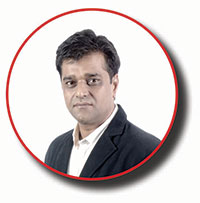 “Using steel as a structural material provides with more flexibility, precision and faster execution. Factors such as recyclability of material, shop fabrication and faster erection and execution are the result of accepting steel as a structural system in commercial and residential buildings beyond industrial and large civic structures. The Potash Tower steel diagrid structural system has allowed iconic architectural form while adding to other sustainability measures.” 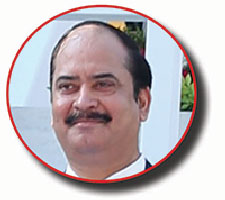 “Potash Tower is really an iconic building in Ahmedabad. Initially, we sketched out a vision of a timeless, unique and iconic building… something distinctive which will be remembered for its beautiful structure for years to come. The vision the management set led us to finalize the ‘diamond’ shape structure after numerous visitations to international structures and presentations. Finally, we chose to build our ‘Potash Tower’ with uniqueness in all respects with the best team of architects, consultants and designers. The major attraction of the Potash Tower is its unique design with a world-class diagrid structural system made up of steel and DGU glass and designed with a post-tensioned slab, exhibiting the column-free floors… and the best part was, we got the building a structure exactly as we envisioned during the conceptualization stage.”

STRUCTURAL UNIQUENESS
Potash Tower is designed with post-tensioned slabs (PT) that are typically flat slabs designed to achieve longer spans. The building is designed to maximize column-free clear floor space through the proposed implementation of a diagrid exoskeleton system. The exoskeleton diagrid system is a structural system of diagonally intersecting metal members that acts as an efficient structural and façade envelope.

Considering the proposed architectural intent and the shape of the building, the regular vertical column and beam system was not resulting in an integrated system. The corner free column space with inclined façade members resulted in exploring the diagrid structural system.

Since the building footprint is very small, the client wanted to utilize maximum floor space without obstructions. So, the architect proposed a diagrid structure with a column-free floor for maximum efficiency.

The iconic character of the building is achieved by its dynamic façade appearance and designing an energy-efficient workspace was another aspect considered in the design development of Potash Tower.

A High-performance DGU façade was considered to reduce the incident solar radiation, further reducing energy consumption, and increasing indoor thermal comfort levels. Double glazing will also act as a barrier to the noise generated outdoors by the metro, ongoing vehicular traffic and other ambient noise in the surrounding context. The project is designed with the intent to be IGBC-Green Certified.

Merits of a Diagrid System

SOFTWARE USED
STAAD and Revit were used to create the virtual model of the Potash Tower. The use of BIM technology enabled the design team to develop and integrate the structural system as a design element.

The structural exoskeleton system creates an effortlessly iconic character of the building in the dense urban junction.

IN CONCLUSION
The initial project timeline was 9 months but this was disrupted by the onset of Covid-19 and increased steel prices.

Due to these unforeseen circumstances, the project took 21 months to complete, but the client and their top management have greatly appreciated the ultimate outcome. They are very happy and satisfied with the project which is at par with their initial expectations.