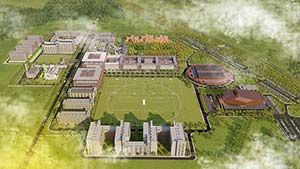 This special section covers the out-of-the-box design having steel as an essential element of the design. The main aim of this section is to showcase how steel can be innovatively used in today’s world of architecture.

Here Ar. Stephane Paumier, Design Head, SPA Design unveil their out-of-the-box design concept that ought to turn the tables in the future…

The campus for the O.P. Jindal Global University is planned away from the city of Sonepat. As a Greenfield project with no built surroundings, the design is based on a very rigorous geometrical framework of “traces regulators” of squares and golden rectangles, dear to European architecture as well as Indian classical architecture.

Design Specifics
The project is designed like a vast classical garden where the nature has been tamed by the rule of geometry as the metaphor for the men pacified by the rule of law. The center of the campus is occupied by the academic block conceived like a floating line made of squares of 60X60m, for a mega building of 240mX60m. The entire building is lifted on pilots to offer a continuous shaded park below the structures. The program is a combination of flexible spaces like classrooms, seminar rooms and faculty offices and pre-determined spaces like auditoria, library reception and kitchen.

Steeling Edifice
The structure of the project exposes the nature of the program as well as the structural possibilities and the architectural freedom offered by large span steel structures. The structural system is based on a combination of cores made of cast in situ concrete that house the staircases, lifts, and shafts in between the cores are the flying mega-trusses, that carry 3 floors of flexible workspace. The large span steel trusses are exposed as the facade and are entirely flexible inside as no columns are hampering the open spaces. The heroic character of the trusses is reinforced by the red paint that signal the project on the horizon of the plains of Haryana, like a piece of land-art in the green fields.

The permanent elements are made in RCC like large auditoria, reception, library, and cafeterias sit in the middle of the courtyards, making them public spaces in true sense. Galleries and staircases are placed externally to reveal the dynamism of constant movements of the students behind the colored screen-printed glass panes, reminiscence of the Indian jalis.

The faculty housing is a line of “immeubles villas”, dear to Le Corbusier, forming the visual boundary of the campus. All the buildings come together around a network of gardens and parks, reintroducing the lost landscape of agricultural fields and vegetable gardens into the university. The other major consideration was the very short time of 18 months given for study and construction of the academic block. Therefore, the methodology of construction became the key to a successful planning. These deadlines were achieved by pre-fabrication of large structural steel elements while the casting of in-situ RCC cores was happening. The site was turned into a well-managed open-air factory with reinforcement yards and steel trusses fabrication yards all around the building.

By the time, the RCC cores were ready, the trusses as large as 60 M X 13 M could be lifted and bolted in place with heavy duty mobile cranes. All the joints between trusses and columns are bolted connections to minimize welding at heights and minimize time wastage.

The technology of steel prefabrication was then followed in using a composite floor system made of TATA deck sheeting for all the floor plates to avoid formwork and accelerate construction activity. Metal deck sheeting thus forms a part of structural floor arrangement to reduce conventional reinforcement in tension zones. It was made possible to cast 4 floors at the same time, without any scaffolding. More than 2500 workers were employed round the clock by the contractor at peak time and it took only 60 days to assemble the structure after the RCC cores were erected.

The O.P. Jindal University academic block is an attempt to demonstrate that if responsibly design, a steel building can be sustainable. Here are the points that need to be considered:

The self-weight was being minimized drastically compared to a conventional building. All facades are high efficiency ceramic fritted double glazing, the partitions are made of light weight gypsum board with little embodied energy, the total weight of the building on the ground, therefore the foundation design, is minimal. The large span also permitted a full continuity of a shaded landscape below the pilots, offering coolness to the open spaces. The conception minimized air-conditioning to rooms only, leaving all circulations and staircases naturally ventilated. All the material used in the building are clearly identifiable and can be dismantled and recycled easily.