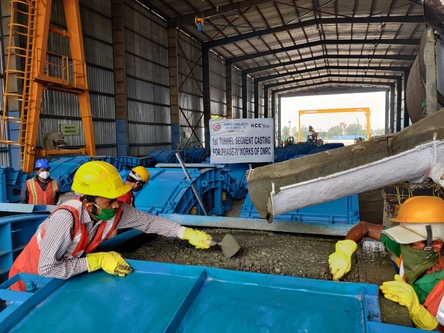 The Delhi Metro Rail Corporation (DMRC) commenced construction work of the underground section of Phase 4 on the Janakpuri West – RK Ashram Marg corridor. As part of the work, construction of the D Wall as well as the casting of tunnel segments of the 28.92 kilometre long corridor was formally started.

The work commenced for the construction of D Wall at the Krishna Park Extension Metro station and the tunnel segments shall be used for tunneling with Tunnel Boring Machines (TBM) on a 1.4 kilometre stretch between Janakpuri West and Keshopur. In addition, this approximately two kilometre long stretch will also have the Krishna Park Extension station in between as well as a 365 metre cut and cover open ramp near Keshopur leading to the elevated section.

The Janakpuri West – RK Ashram Marg Metro corridor consists of a total of 7.74 kilometres of underground lines. The commencement of this important component of construction work was also witnessed by DMRC’s Managing Director, Dr. Mangu Singh and other senior officials via video conferencing.

D Walls or Diaphragm walls are structural concrete walls constructed in deep excavation based projects. Diaphragm walls are often used at congested sites, close to existing structures, where there is restricted headroom, or where the excavation is of a depth that would otherwise require the removal of much greater volumes of soil. The excavated area is secured by these walls and then the construction work of the underground station is commenced. This technology has been used for Delhi Metro’s underground stations right since Phase 1.

The tunnel segments are being cast at the state of the art casting yard developed at Mundka. The casting yard will make 2,100 rings for the tunneling work.

This Work was awarded in the month of December last year on Engineering, Procurement and Construction (EPC) basis. Inspite of all constraints like shortage of labourers and materials due to lock down, the mile stone could be achieved on time. On the 24th of June, the casting work of u-girders for the same corridor was started.

The 28.92 km long Janakpuri West – R. K Ahsram Marg corridor is an extension of Magenta Line and will come up with 22 stations. Construction work on this particular section had started in December last year.

Under Phase Four, 61.679 kilometres of new Metro lines shall be constructed across three different corridors comprising 45 Metro stations. These new sections shall provide interconnectivity among the already operational sections of Delhi Metro. Out of this, 22.35 kilometres will be underground.

Merging Accuracy with Complexity in Form