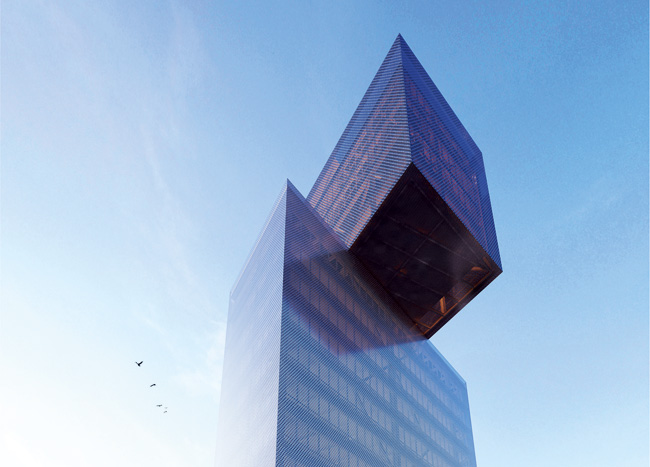 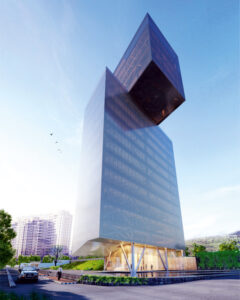 Design Concept
The site is located in the north-east corner of a residential complex in Kharghar, Navi Mumbai. The elongated southern section of the site is reserved for a future low-rise residential development, and the commercial building is restricted to the elongated L-shaped bulb at the northern extremity.

The raised residential development on the west, resulting in a sunken section within the site, along with the shape of the plot, the orientation of the views, and the surrounding hills stretching from west to east along the north, and the fragmented building program have contributed to the development of the building concept.

Two perpendicularly oriented prisms form the bulk of the building area. The lower one contains flexible, free span work spaces for sale/lease, and the upper one is specifically formatted to suit the requirements of the client’s corporate office. The long and slender lower block hovers above a landscaped sunken courtyard that also contains the lobby and public spaces. The building volume serves as a transition point between two conditions within the landscape. On the south, where cars approach the lobby, the building projects out from a steeply banked grass berm that merges the levels from the road access to the raised section on the west. The movement under this hovering monolith creates a volumetric expansion towards the north where a large water sheet creates a space of calm and reflection where the lobby and public areas open out onto.

This movement is a spatial and transitional analog for the barely plausible relationship between the upper and lower building blocks. The impression is one of balancing on the edge as the upper block turns at 90 degrees and perches delicately on the lower one, cantilevering out 16.0m over the sunken courtyard below.

This volumetric separation and reorientation reduces the perceived mass of the building, creating inverted and differentially scaled ‘T’ sections in 2 axes, and especially as the building is approached, the sensation is of an elongated edge hovering above the water and a large prism balancing delicately over it. From a distance, the volume of the corporate office becomes the attractor, a point of reference.

Structurally Fluent
These precise transitions need a highly tuned and nuanced set of structural solutions, as well as a unified skin that would break from the traditional scale of a stratified expression, developing instead a more ambiguous monolithic proportion that would heighten the sense of a series of precarious intersections between massive, porous volumes.

Apart from the shear core in the south, the superstructure consists primarily of steel. A lightweight web of slender members expresses the structural behavior of the building. The final solution is simple and elegant, but disguised within this coherent network is a complex engineering process that has effectively managed to reconcile an ambitious idea with the practical optimization and scalable replication and detailing during the fabrication process that is required to execute the structure.

The structural configuration went through multiple iterations before the design team reached a solution, but overall, it was found that the engineers from Cantor Seinuk (WSP) were able to substantially reduce the material consumption and member sizes by working with a delicate, distributed web. The maximum impact has been achieved at the ground level and volumetric intersection points where a lightness that is commensurate with the design intent has been expressed.

Aesthetics and Exteriors
The double skin solution, with superimposed layers of glass and a punched/perforated aluminum screening system enables excellent views outside of the office spaces while filtering the glare and heat. Controlled daylight floods the internal spaces, reducing energy costs through a scientific analysis of perforation patterns while also eliminating the need for any internal solar control blinds.

This layered assembly of perforated aluminum, glass and the exposed network of structural members creates a sense of density, lightness and porosity that vitiates the mass of the building volumes.

Statue of Equality to be unveiled