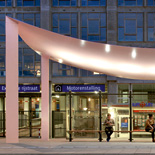 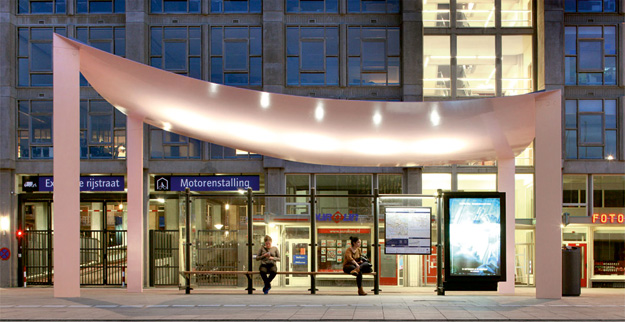 The three Rotterdam bus shelters were designed by Dutch studio Maxwan with concave and convex razor-thin rooftops reminiscent of billowing fabric. According to Maxwan, the three 5-by-10-metre canopies, which measure just 9.5 millimetres in thickness, are the world’s thinnest steel roofs. The pastel-pink Bus Station Canopies are located on a patch of tarmac outside a new bus terminus in Rotterdam Central District, providing seated shelters for 40 waiting passengers. The canopies are raised up on four flat-steel columns. One arches upwards in the centre, while another bows downward – both are intended to look like fabric moving in the wind. The caving helps makes the canopies structurally sound, allows for a thinner roof, and is beautiful, and the studio nicknamed the shelters Pillow and Hammock after these forms.

Produced by Dutch firm Studio Metalix, the curving surfaces are finished with glossy pastel-pink paintwork. The tables, treated with a skin-tone finish, are warped silk-gloss surfaces that conjure up images of suspended cloth and wind-blown sails, despite weighing five tonnes each. According to studio founder Rients Dijkstra, the pink paintwork was a purely emotional choice. Pillow and Hammock are part of a major overhaul of the Dutch railway system, including upgrading stations in Amsterdam, The Hague, Utrecht and Rotterdam. An original brief from the City of Rotterdam outlined the need for 16 standard-issue bus shelters to serve a newly opened bus station. Maxwan instead created just two that fitted the same brief to shelter 40 people sitting and more standing for the same budget. The efforts at creating quality environments related to public transport should not be limited to the station building itself.

One East Side, Birmingham