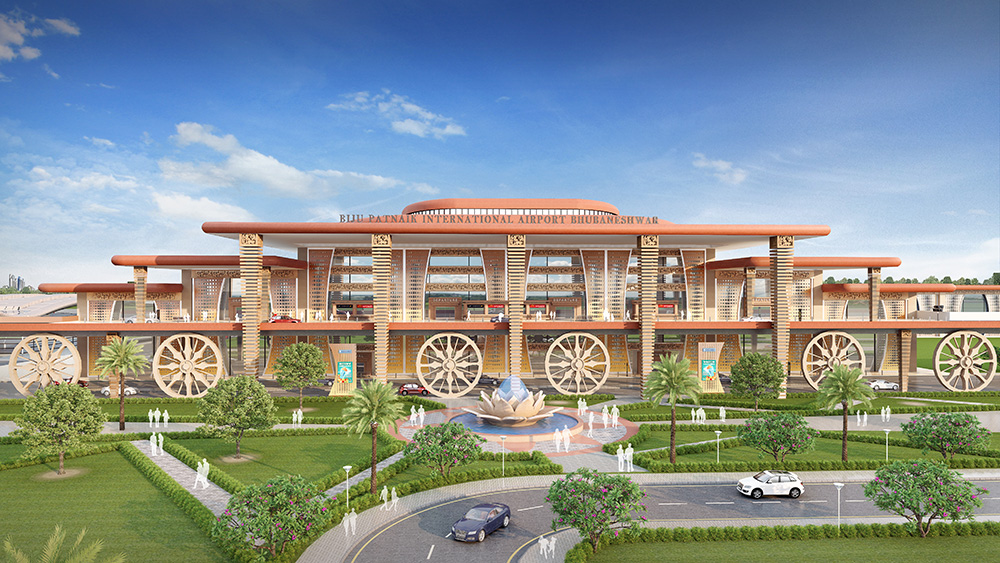 Design Intent
The brief of the proposed terminal building posed a challenge to meet the aspiration of passengers which was to have a glimpse of such a large treasure of culture and heritage. The existing terminal building stands in stark contrast to the old building in terms of planning, design and technology which furthers the challenge for the proposed design to bring in harmony and balance.

Thus, the main brief was to understand the rich cultural heritage of the place with its art and architecture and to identify various aspects in terms of spatial configuration and building elements from local architecture which can be incorporated in the built form, interiors and landscape of the terminal building with context and theme.

Ideation
Talking about Orissa the first thing that strikes one’s mind is the great “CHARIOT PARADE” or the “RATH YATRA’ of Jagannath Puri which gives meaning to every aspect of a journey and hence to life. Through this project, the intend to bring that experiential feel to life for the visitors along with showcasing the ancient and modern elements of Bhubaneswar to give complete meaning to every journey whether from or to this magnificent city. 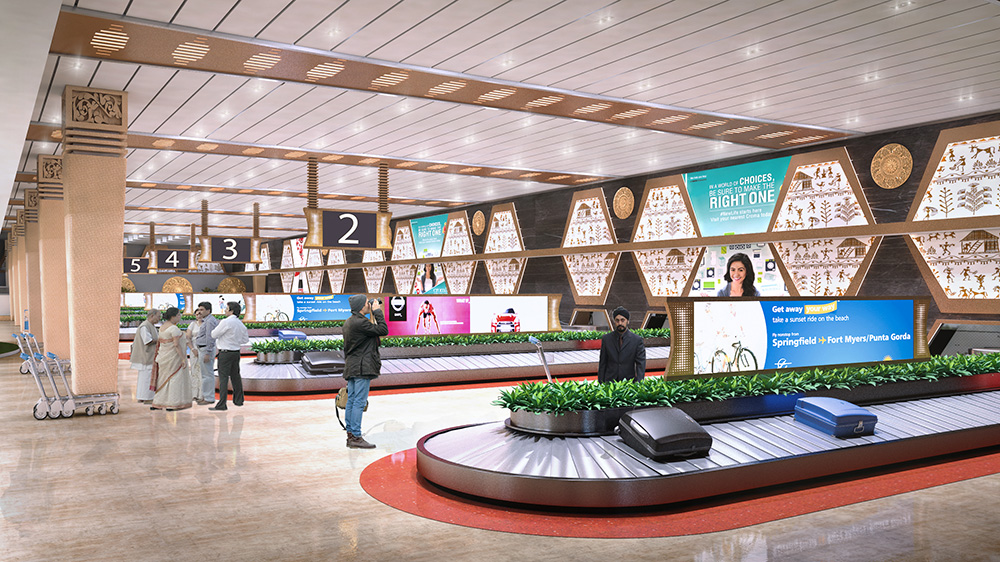 Steeling Essence
With constant reviewing of technological advancements and updating the material is recommend for design and construction. Steel is a preferred material due to its versatility. Steel’s strength to weight ratio enables light weight forms and flexibility in regenerative design projects. Steel’s malleability and ductility along with cost bends to our will to create ever larger span structures.

Use of steel is also beneficial during time constraints when steel prefabrication can take place off-site and quick assembly can be achieved on-site with guaranteed precision.

Architectural Characteristics
The new airport is envisioned to create a fusion of traditional and modern architecture, adopted from the symbolic Jagannath Rath and Konark wheel, in the spirit of movement. The corbelled roofing profile for the building form as well as the stone bands with motifs is replicated on the front facade, creating a distinct style in aviation architecture. The division of the vertical massing on the bullnose of the roof of the airport is derived from the topmost part of the temple.

The drop off bay is flanked by huge columns which are designed reflecting the traditional motifs and sculptures while the wheels of the chariot are symbolic to ‘Sun Dial’, both inspired from traditional temple architecture. Using the locally available soapstone for the sundial and the timber for the band with motifs on the top not only retains its original character but also makes it cost-effective. The laser cut jaali with bronze golden finish clearly sets a good example for fusing the contemporary materials with traditional design elements.

The project is a compliment to a holistic development based on the local context, not just in terms of elevation but also volume and space. As the visitors enters the building, they should feel as if they have entered the temple itself. “Architecture has the capacity to influence people’s behaviour and their feelings. Only when they will be able to relate with their surroundings, is when they will experience a sense of belonging and ownership towards it.” As visitors enter the departure area on the first floor, they are greeted by large open spaces flanked with landscaped area and flooded by light wells, thus bringing about the notion of moving through a large temple complex. The entire theme of the airport revolves around taking the visitor through the yatra themselves. 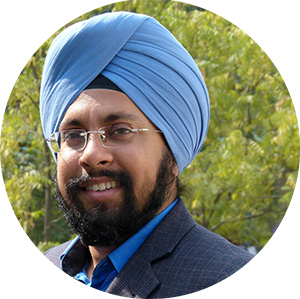 This is a very special project since this project changes the perception of how terminals are designed in India. Local art and culture are just not in the artwork but also in the extent of terminal’s interior and exterior design. This terminal is also unique since the passenger flow processes have been digitized, thereby increasing efficiency in processes like security check, baggage screening, etc. The time saved in this process shall provide the opportunity to the passenger to relax in the hold room and enjoy the retail and F&B experience.
Gurpreet Shah
Principal Architect, Creative Group

Art in Architecture
Fifteen days before the yatra the three Gods, Balabhadra, Subhadra and Jagannath are taken for bath with 108 pots of cold water from the sacred well of Goddess Sitala and then covered with Ganesh Vesha (Elephant masks). Huge animals are symbols of power and protection, the same being reason behind presence of huge animal sculptures while entering the temples of Bhubaneswar. “The Lion Guard” intends to bring a feeling of safety, purity and grandeur right from the time visitors enter the building. Additions of 108 kalasha are taken from the Rath Yatra where the deities are washed to rejuvenate them.

The area after the staircase intends to show the phase where Goddess Laxmi is taking care of Lord Jagannath after which he takes permission and comes out for the beginning of the Yatra. The Art installation of a Lotus shell transformation tries to depict this fable. Even in the interior of the building, various artworks have been introduced to reimagine mythological episodes associated with the city and its people. The pillars with the Modern Vahanas on the top would symbolize the Angaraga that depicts evolution, development and how things change and looking at something in a new light.

Inspired by Pattachitra motifs and colors, the check in counter backdrop constitutes of curved lines in the form of garlands and floral patterns constructed of lacquered glass and brass. Even the soffit level of the hold areas is depicted with tribal artworks of brass and thread work with backlighting. The feature walls made of calcium silicate panels digitally printed with local art, wheels of the chariot forming an abstract city skyline and recreation of the grand chariot welcoming the passengers into the city, are all ways to make this building meant as a transit corridor into something much more. 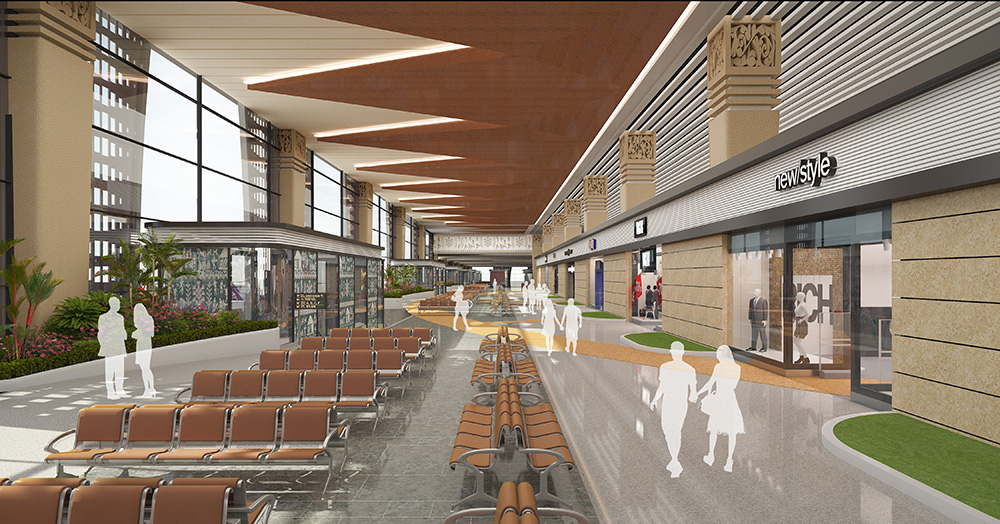 Geometrics
Planning of the building was done not only to ease the conventional passenger flow but also to not invoke the feeling of going through a terminal building, rather a place where people would want to be. To induce this further, granite flooring highlighter bands help in way finding – a technique for promoting a user-friendly design by invoking various senses of the person.

The form of the building – the corbelling provides an advantage in providing skylights of FRP jali made of polycarbonate sheets, thus flooding the building with natural light and reduce energy consumption. The use of materials has also been planned to make the project economically sustainable.

High pressure laminates over the structural columns lend it the required stone finish while using pre-cast members for the structure make it easy to assemble and save time. The structure also uses post- tensioning to increase the structural strength and achieve the required large span structure. Acoustically treated ceilings with wooden panels have also been used to improve the performance of the building.

After the conceptualization of the project and basic decisions regarding the planning, architectural software like CAD and modelling software like Sketchup were used for generating drawings and 3- D for the project. The Building Information Modelling (BIM) was used like CAD, Revit software to simulate and understand the airport and airspace between them. Bhubaneswar Airport gave an opportunity to track building areas for program and gauge the IRR for commercial development.

Experience
The experience of the project was almost spiritual with an aim to design the entire project, from the signage to the artwork on the ceiling as a tribute to Odisha’s large treasure of culture and heritage. It was unique to think beyond steel and large span structures by providing a soul in the building using local flavour of Bhubaneswar. The ideation of the digital flow processes and local terminal aesthetics gave this project a perfect balance to create an iconic design.

The project was initiated in December 2018, when the proposal for the design was floated. The design was conceptualised in the following month and finalised in January 2019. 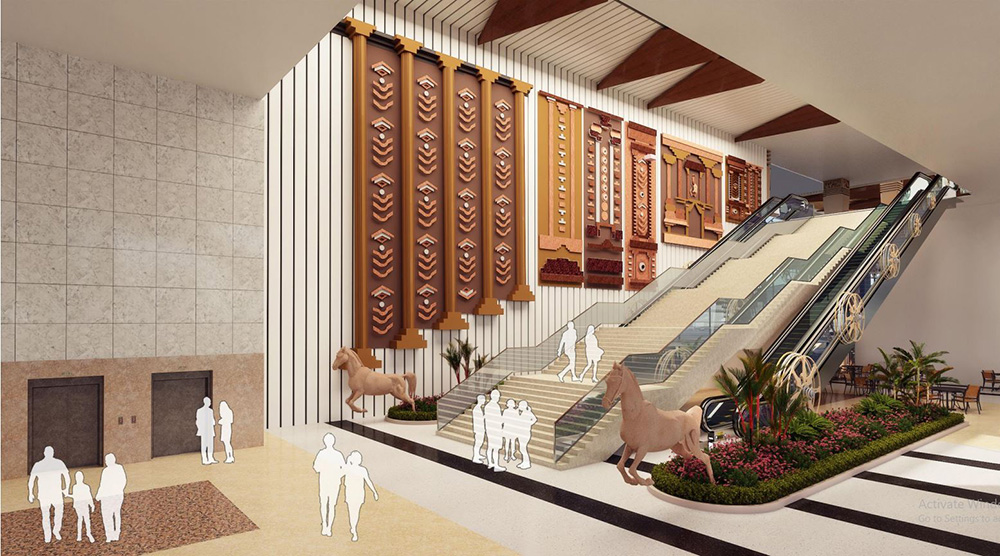